Warning: fgets() expects parameter 1 to be resource, boolean given in /var/www/web16/htdocs/www2/typo3conf/ext/seo_wetter/pi1/class.tx_seowetter_pi1.php on line 105

Warning: fclose() expects parameter 1 to be resource, boolean given in /var/www/web16/htdocs/www2/typo3conf/ext/seo_wetter/pi1/class.tx_seowetter_pi1.php on line 108
 Steinbock Worlds

Help for Conservation of Nature and get a lot of information around the Nature Park!

We will gladly keep you informed via e-mail

The Alpine steinbock has a very chequered history in the High Mountain Nature Park. Up until the beginning of the 17th century, there were several hundred animals. After fierce conflicts between hunters and poachers, the steinbock population was deliberately exterminated by the Prince-Bishop of Salzburg so as to avoid further bloodshed. Since the reintroduction of their species, the steinbock has returned to the Nature Park. In "Steinbock Worlds", visitors can learn useful information about steinbocks and real steinbocks can be observed in the wild. 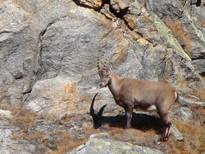 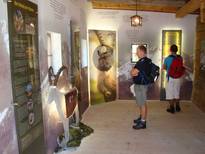